Tirana, 7 December 2012 – A unique show of Japanese poetry and culture took place on Friday evening at the Comedy Theater, organized by Art Kontakt in collaboration with Poeteka with the support of JTI.  Ema Andrea – an actress, Fatos Qerimi and Elinor Butka – instrumentists, and Agron Biba – an actor of an unrepeatable stage mimicking skills, performed on a surprisingly functional and simple stage designed by Klod Dedja. They produced a unique show thanks to the amazing poetries selected by Arian Leka, a well-known poet and the producer of POETEKA, the main poetry festival in Albania.

“We chose more than 20 authors for achieving a virtuous presentation of the high culture of haiku, Japanese theater, etc” – explained Director Arian Leka after the show, which took more than 80 minutes. 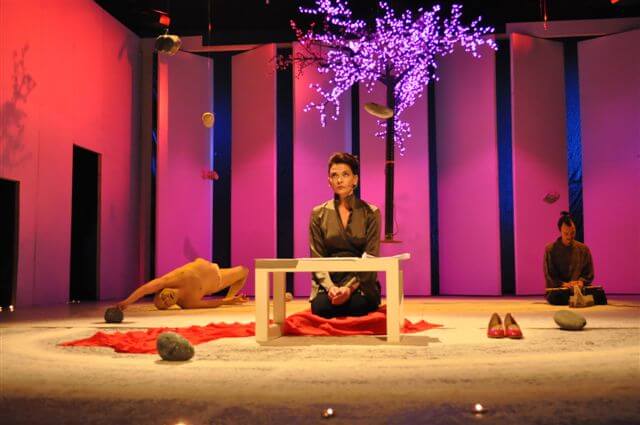 Ema Andrea – almost the single human voice during the performance explained the extraordinary spiritual strength of the Japanese poetry, and especially the tradition of haiku. “Haiku is like an assembly of poetry lines, which looks like a human being walking on water without drawing any circles” – said Andrea. According to the actress, who sat on stage without moving for more than an hour, this show was both a challenge, and an extraordinary experience in her career.

Agron Biba, the Albanian actor from Macedonia, surprised the audience with his mimics, and with the deep echo of his voice reciting in Japanese, being the only moving subject throughout the show.

The traditional Japanese flutes, the xylophones, the traditional and modern musical arrangements accompanying the Japanese poetry gave the show an amazing emotional strength and rare sensitivity.

“It was a pleasure to travel to the Far East through the brilliant colors of a kind of music, which is spontaneously natural and genuine in its emotions” – said after the show Fatos Qerimi, an Albanian musician of a world caliber.

Elinor Butka on his side demonstrated an extreme sensitivity through the flute, xylophone, and the entire musical composition, which was well-studied and emotionally magic. 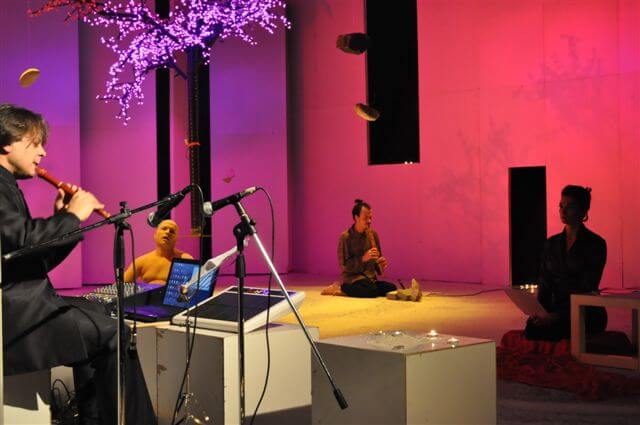 “It was a trip into the metaphysics of man, into his endless depth, into the ocean of hearts, which build their own world within poetry-sanctified details” – said Andi Tepelena, Director of Art Kontakt.

Përparim Tushaj, Director of JTI for Albania, Kosova, and Macedonia, said that the show was a materialization of the JTI mission to build cultural bridges between people in a global level. He emphasized the fact that Japan and Albania are two small countries with a tragically similar history, but with different destinies, because they have relied on different life philosophies.

“Exposing yourself to different cultures means you are open-minded” – said Tushaj, thanking the actors and the well-cultivated audience, that attended the show.

The audience this time consisted mainly of distinguished representatives of literature and art, writers, actors, painters, and a lot of young poetry fans.